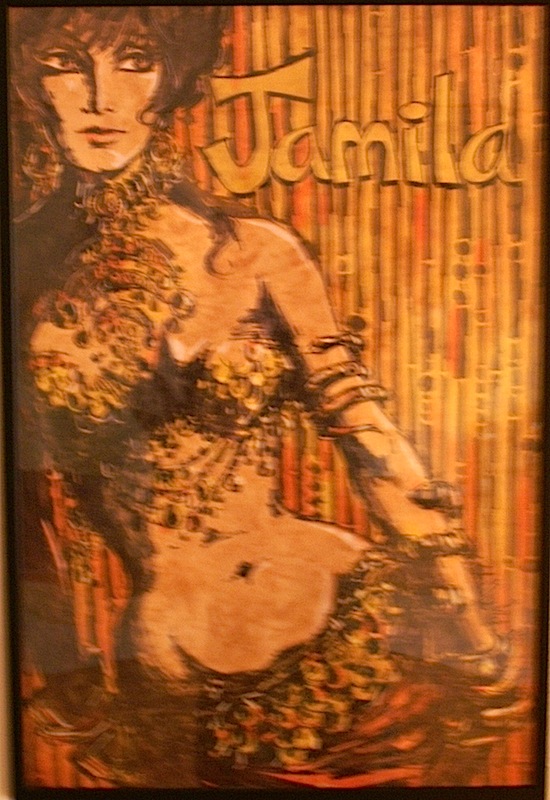 This picture of the famed Jamila Salimpour hangs in Janelle's studio.
Rather hard to photograph due to a wavy plastic cover sheet!
Like many/most West coast trained dancers, Zorba considers
Jamila to be his Great-Great-Great-whatever dance Grandmother!

Zorba has been a performer his entire life! Trained in Classical Music (Piano and French Horn) from a very early age, he went on to perform throughout his primary school, secondary school, and college years. He was also a fixture in local bands and orchestras in his adult life, including the famous

In early 1996 dance caught his attention, and he joined

The Greek Village Dancers of the Monterey Peninsula, starting to perform with them after a two year apprenticeship.

It was only natural when, upon seeing a Belly Dancer, that he would become interested in this ancient art form. Under the tutelage of Janette Benedon-Brenner, Jamaica Sinclair, and many other teachers and workshop instructors; he has evolved his dance art to a very high level.

Even as rare as male Belly Dance artists are, Zorba is forging a unique place among them as he specializes in veil dancing, and possesses a very smooth, graceful, and flowing dance style that is generally not seen among his male peers. "I didn't know men's hips could move like that!" is a comment that has been heard more than once in reference to Zorba. "I don't let a minor detail such as mere gender stand in my way" he says.

Possessing both of the legendary Nadia Gamal's two dance canes, Zorba loves to dance the Raks Assaya, the traditional Middle Eastern cane dance. He also specializes in the awesome Raks Al Shemadan, the traditional Egyptian Candelabrum dance. But his true love is given to graceful veil dancing, both single veil and double. "Veil dancing is as much fun as you can have with your clothes on!" he likes to say. He delights in floaty silk veils, even when performing double veil; but he has many veils to choose from and loves them all, including a pair of huge 3/4 circle Tissue Lamé "monsters".