After acquiring the Mellophone, I ran across a 1962 King "Cleveland Superior" Cornet that nobody seemed interested in buying as it looked fairly rough. I ended up acquiring it for $3.25! From a strictly monetary standpoint, it was overpriced by the time I got it fixed up. Nonetheless, its now a good solid playing horn, albeit not the prettiest. The seller noted that lacquerless instruments are the "in thing" among a certain crowd, so there's that.

eBay pic. Not much lacquer and has a few dings...

eBay pic. Even has a case, unlike the Mellophone.

eBay pic. Very common place for trumpets and cornets to get dented.

eBay pic. Actually some remaining lacquer inside the bell.

eBay pic. Yet another minor ding.

Ok, so compared to the fairly pristine Mellophone that is twice the age of this thing, this one looks like it was rode hard and put away wet - and it probably was. The Cleveland line was King's mid-range instruments which were very often sold to schools. From a dent/ding standpoint, it was in pretty good shape overall, the valves were in great shape other than consumables, but I've never seen a brass instrument that has lost as much lacquer as this one has. Poor thing was obviously seldom/never wiped down - pretty symptomatic of a school horn. I suspect it was in continuous use for many years, probably until the leadpipe brace was broken (detailed below), then was put away to languish in storage until it came to the charity that sold it to me - but in reality, only the Goddess would know.

This model Cornet seems to be fairly well regarded - my research came back with either "Spectacular, built like a tank", or "Mediocre, but built like a tank". They certainly seem to have made a metric butt ton of them, eBay and other online sites are full of "Cleveland" Cornets - as well as trumpets and other instruments.

No need to relate the entire history of "King" band instruments here. Just a note about "Cleveland". "Cleveland" was a short lived, but apparently well regarded instrument maker that started ca 1919, and was absorbed into "King" in 1925. The relationship between the two companies was apparently cordial, its reported that "King" built some instruments for "Cleveland" at some point when the latter was overwhelmed with orders. I guess "Cleveland" finally threw in the towel, so they became "King's" second line. "Cleveland" had their own second line, "American Standard", which became "King's" third line. Eventually, "American Standard" was renamed to "Tempo" - probably to avoid confusion with toilets and other plumbing fixtures.

As for which model number it is, I'm not sure. Its either the above mentioned 601B (NOT to be confused with 601 no-suffix which is considerably different!) or its a 602. There seems to be a bit of confusion between the two, it may be further exacerbated by "King" vs. "Cleveland" (and even vs. "American Standard/Tempo"). There may very well be exactly zero difference between all of them for all that I know! Comparing pictures of "King 602", "Cleveland 602", and "American Standard/Tempo 602" Cornets shows no discernible differences other than some later version Kings have a thumb hook on top of the 1st valve slide which I haven't seen on Clevelands or Tempos. This latter feature is also found on the "King 603" Cornet which may or may not be the same as a late model King 602.

And yet, according to a 1962 King Catalog (The year this cornet was made), it was called a Cleveland 602. The 601B appears in the next oldest catalog I was able to find, a 1953 edition. I cannot tell any difference between the two "from here". It still seems apparent that the one morphed into the other - apparently in the late 1950s, as I'm far more inclined to believe a primary source such as a catalog vs what I read on the Internet someplace.

First thing! Give it a bath! The nib on the 2nd valve slide came off while pulling the slide.

Pulled out and cleaned.

Reassembled. Tried it with the Bach mellophone mouthpiece. Not
particularly good. Brace needs to be resoldered to the leadpipe.

A knockoff of a Bach 7C cornet mouthpiece was somewhat more playable!

Side view - interesting dings on the upper bell area.

The most intact lacquer on the entire instrument!

Ferrule missing from leadpipe spit valve. Someone made it work anyway!

1st valve slide spit valve all there, but doesn't line up with its ferrule.

Will need a new cork too...

Its gonna take some work, some of it by a professional. At the very least, both spit valves need attention, the 2nd valve slide's nib needs to be soldered back on, the leadpipe brace needs to be resoldered, and the dent in the rear bow needs to be ironed out. While the guy has it, he might as well iron out the minor dings in the leadpipe and bell. Some of the felts on the valves need replacing, I might throw a "valve rebuild" kit at it - and the missing finger ring with set screw are on order - each of which exceeded the purchase price of the horn!

I first tried playing it with my mellophone mouthpiece as it fits. As expected, not a particularly good experience. I actually had had a Bach 7C cornet mouthpiece in my possession that had come with the mellophone, where it didn't give particularly good results. I sold it about 2 weeks before I encountered this cornet - obviously should have kept it. So I bought a brand new "Legend" 7C mouthpiece - a knockoff of the Bach - for about $3 more than I cleared in the sale of the genuine Bach. I'm no cornet player for sure, but it was much better than a mellophone mouthpiece as you'd expect - and it was new, pretty, and smooth. So by buying this mouthpiece, I doubled the amount of money I have in this horn!


Silly video I made from the eBay pix while I was waiting for it to arrive...

Replacement thumb screw for the still on order finger ring.

After Return From Repair Shop:

Cornet just before it went to the repair shop. Note bent and dented leadpipe
with 2nd slide nib taped to same so it wouldn't get lost before repair.

Back from repair shop. Leadpipe now straight and dent free!

Also viewable in the above pictures, the leadpipe's spit valve was repaired with a new
ferrule, as well as a new synthetic "cork" that came with the above valve rebuild kit.

This too can be seen above: Closeup of the 2nd valve slide nib soldered back on.

The only remaining sign of the two biggest dings in the bell are these two spots that retain
their lacquer as the low spots protected same. These dents had been there for a long time!

The finger ring FINALLY arrived while the horn was in the shop.

Third valve slide water key has been straightened out...

...and its new synthetic "cork" also came with the valve rebuild kit.

The most impressive part of the repair was the de-denting of the "bow"...

... which was also the most expensive part of the repair!

There was a dent right where the bell tube connected to the 1st valve. It was so minor that
I didn't ask the repair guy to straighten it out, but he did anyway. Its not as perfect as
the bow repair as its a VERY hard place to get at, but its vastly better than it was before!

Cornet compared to my bugle of unknown provenance. Both have the approximate same length
of tubing and appear to be in the same Bb key. So where does tubing stop and the bell begin?

An attempt at lacquer removal:

Disassembled, and lacquer stripper sprayed on for 30 minutes.

Scraped with a popsicle stick, old laquer from just inside the outside rim.

More removed from inside of bell (build-up center picture).

The yellow on the nickel silver portion is un-removed lacquer...

Got at least some of it off the valve stack.

Hard to tell here: The lacquer that has been gone for years is obvious, how much of the
still shiny area has lacquer is unknown. Certainly, there is still some on the nickel silver
at the lower left. Note the partial serial number "282" on the main tuning slide.

I figured that since 95% of the lacquer was gone, I'd make an attempt to remove the rest of it. I was only partially successful. I think I got most of it off the bell, but other places I either don't know, or it didn't come off, such as the above picture of the 3rd valve slide where its still partially extant on the nickel silver portion (where it is easy to see). Time will tell as previously protected portions start to oxidize - I may do it again eventually. I'm also hoping that any remaining lacquer is compromised enough to slough off over time.

The partial serial number on the main tuning slide was a bit of a surprise - I wouldn't have thought something like this would need to be serialized to an instrument built as late as 1962, but there it is!

Similar to the Mellophone, the cornet has a safe place up high on the wall.

Most of these cornets have finger buttons, top valve caps, and bottom valve caps like this one.

A few have slightly different valve caps, but the same finger buttons.

My own instrument with the "usual" finger buttons and top caps, but very different bottom caps.

An incomplete and unscientific look around the web shows most of these Cleveland Cornets with caps as shown in the first picture of this section - and the first picture on this page for that matter. The second picture of this section shows an alternate I've noticed a few times. Changes like this happen all the time in production of things like this and I don't consider it unusual. Interestingly, all finger buttons seem to be identical between all of these horns I've noticed thus far.

However, the bottom valve caps on my instrument appear to be unique. Not only have I not been able to find another example of a Cleveland Cornet with the valve caps in question, but I haven't been able to find valve caps like these at all on ANY instrument - this latter factoid is probably meaningless. But I'm reasonably convinced that these bottom caps are not original to the instrument: Not only are they apparently not seen anywhere else, but they also don't match the top ones. They are plain brass, originally lacquered - all others I've noted have been nickel, sometimes gold lacquered, sometimes not. Even if King used plain brass on some instruments for whatever reason, I'd at least expect the top and bottom caps to match in both finish as well as knurling style.

I'm OCD over history like this - what happened? The Great Goddess Herself may not know! They may have been swapped out by a repair shop or a school district (presuming this was a school horn), or 2 kids may have swapped bottom caps between their instruments out of sheer boredom, or Hell - maybe they've been there the entire time and were the result of a production weirdness at King. We'll never know!

The "usual" bottom valve caps being sold as such, note gold lacquer over nickel.

Very different ones also advertised as being for this model - I'm not convinced.
They do appear to be gold lacquer over nickel which is at least consistent,
but I haven't noticed this style on these instruments as yet. I'll take the seller
at their word that they actually do fit. Who knows - perhaps a similar situation? 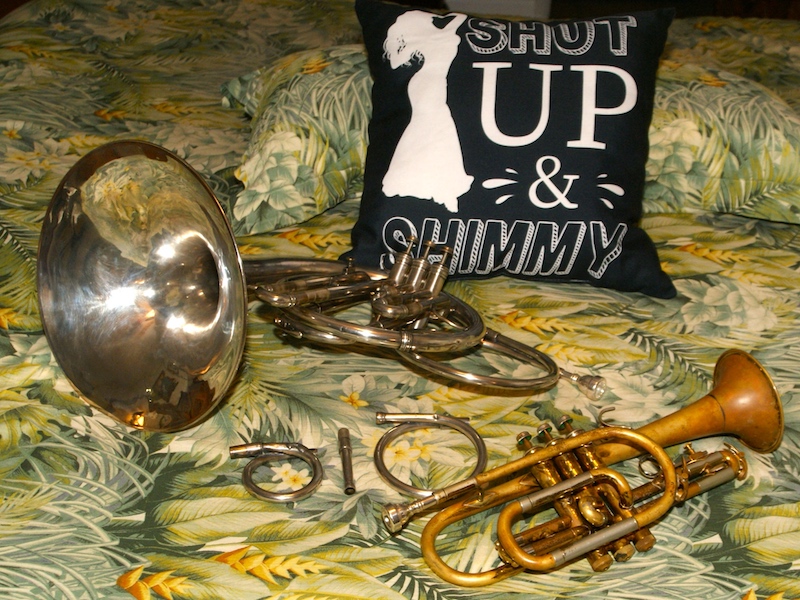 The first/last/only picture of both the Cornet as well as the Mellophone in the same place at the same time!