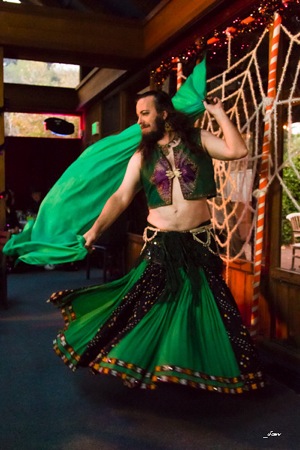 This should be the last entry for 2014. I had had 3 performances scheduled at Santa Cruz's "Crepe Place", two with troupes, one as a soloist. All 3 of them were rained out! I won't complain too loudly as Goddess knows we need the rain!

Three additional brolita pictures added to the 2014 gallery, the last one being some fun with a graphics editor ("The GIMP")!

One additional picture added to the 2014 gallery, this one of moi in the DCM sword dance. Mutter, "sword", mutter...

Additional pix from Carnival of Stars, this time my performance with Dancers of the Crescent Moon have been added to the 2014 gallery.

Performances at the 29th annual - and possibly the very last -

Desert Dance Festival. Dunia, the creatrix and promoter of this festival (as well as the maker of our beautiful Aughkstra) is retiring. It remains to be seen if someone else will take over the reins or not.

First I performed with DCM, Halay, Bint al Shek, , the DCM Sword Dance, and John's Cymbal dance. This is a first for me - I performed with a sword. I don't like sword, never have liked sword, still don't like sword - but both Siwa and Didi are determined that I will dance sword. They both started sword dancing in their respective classes at the same time - I'm quite sure they're in cahoots. The actual sword part actually went fine - but as it takes 1.2 forevers for me to learn a new choreo, Siwa wisely hid me behind another dance sister so my blundering wouldn't be too obvious! Siwa always takes care of her weakest dancers - this time it was my turn. Wasn't the first, won't be the last - but such consideration in a troupe leader is a good thing. Of course, I did offer to stand this dance out - but she wouldn't hear of it!

Anyway, later in the evening, I danced a longer version of the routine I did for Carnival of Stars - more veil while wearing Zills. No problems this time either, I'm getting the hang of it.

Then I had to run off to pick up some wheels for my car, and get back in time for the Gala Show - I didn't want to miss it (as audience). Janelle, and Hassan were among the performers - good show! Janelle gave a shout out to Cory Zamora who unfortunately couldn't make it this year.

DCM performance at the Crepe Place restaurant. We danced Halay, Bint al Shek, and John's Cymbal dance while The Mighty Siwa and myself both did solos. My solo was "Mambo", which always brings the joy out. I received several compliments on it - I project well with this one. Had a blast with my solo!

The "Official" pix are now in, a bunch of my solo performance have been added to, you guessed it! - the 2014 gallery.

A workshop with Paige Lawrence. I really enjoy Paige, his dancing and his workshops! 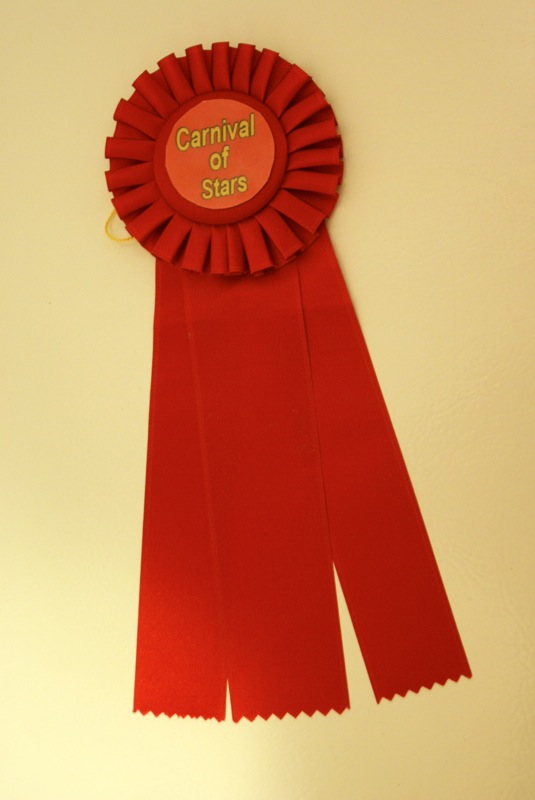 Zorba won "Most Whimsical" at the CoS 2014 costume contest!

Three more pictures from CoS have come in and have been added to the 2014 gallery. The "official" pix still have yet to arrive - stay tuned! 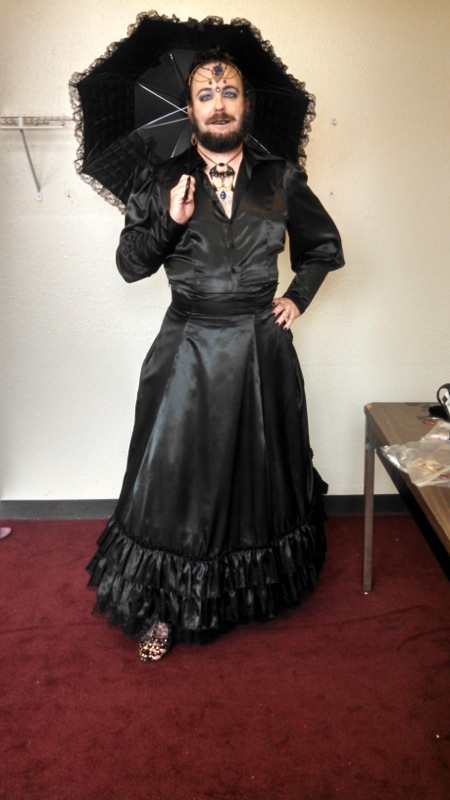 Zorba as "Elegant Gothic Brolita" backstage at Carnival of Stars 2014!
A *VERY* busy day at

Carnival of Stars! First, was a solo performance - a shortened version of the new routine I did at Pajaro Street Grill on 31 May. Danced with my Zildjian Zills and my 4 yard rainbow A'Kai veil. As before, this routine requires veilwork while wearing the Zills - still at the edge of my ability, but it went well, and I was complimented on my veilwork, even though Siwa says I still don't smile enough!

Then there was a costume change, and a reprise of the Litha Faire performance with DCM. We had some problems with Bint El Shek that we were able to recover from, but otherwise the performance went well.

So what does an Elegant Gothic Brolita have to do with Belly Dance? Not sure myself, but CoS has a fantasy costume contest every year, so I decided to try my hand at cosplay! Immediately after the DCM performance, I started getting into the Brolita outfit. Thank Goddess for Siwa, she put my hair up, and both her and my troupe sister Ajita helped me get ready for this. Wearing my EyeScream Gothic jewelry, the outfit is complete with a HUGE petticoat that Siwa made for me, all the makeup and hair, and a first for me: strappy sandals with 3 inch heels!

Now I can say that my long curiosity about heels has been satisfied! On the plus side, they do make one feel even more elegant than a costume like this would do by itself (which is pretty darn elegant!). I had to practice quite a bit just walking in them, but I found that dancing in heels - at least heels no taller than these - is actually easier than walking in them! I had a 75 second long non Belly Dance choreography that I actually managed to remember about 85% of!

With all that said, I'll retain the heels for this outfit, but I'm NOT going to wear them otherwise! As I kind of expected, standing around backstage after my "runway strut", waiting with the rest of the contestants for the judging, my feet hurt - and hurt pretty good! So heels are good, heels are cool; but aside from this outfit, someone else can wear them!

And YES! I won a prize! "Most Whimsical!", got a cool red ribbon and a box of "Bitchin' Baklava" which is pretty darn good! Got TONS of compliments on the costume!

I'm hoping for some more pix of the Brolita costume, an "official" one is on the way, and hopefully some additional promised ones will arrive also. Pix for the solo and DCM performances have been ordered as well. In the meantime, the one Brolita picture above has been added to the 2014 gallery. Enjoy!

Now there are pix posted of the Beltane performance of 1 May at Don Quixote's in the 2014 gallery. Enjoy!

Finally got some pix posted of the Salinas Raks performance of 31 May at Pajaro Street Grill added to the 2014 gallery. Enjoy!

A new (occasional) teacher. Was in the "Space Coast" area of Florida - and wanted to drop in on Mindy's class. Unfortunately, she is taking a hiatus from teaching due to having teenagers - hopefully a short hiatus! So she sent me to one of her teachers, Tambil. Tambil is an old skool Turkish style dancer originally out of New York. I really enjoyed her class as I haven't done much Turkish style, lots of Zills and fast movements! I look forward to her class again in the future - if Mindy restarts teaching, I'll go to both as they hold their respective classes on different nites!

Mariama's "Salinas Raks" - solo performance. I'm rather excited about this one and how it turned out. I did a new number comprised of a fast intro with Zills; a slow introspective veil piece; and a fast finale, also with Zills. This means I had to keep the Zills on during the veil section - which I've done before with varying degrees of success. This was by far the best experience I've had doing this (thank you Cory Zamora!), but wait! It gets even better! During a private with Nikki Traylor-Knowles the previous nite, I actually managed to do a full-on "veil recovery" with Zills on! It wasn't planned, the veil got into a mess, I needed to do a recovery, so instinct took over and I just did it before I realized what I was doing! I did another one in practice later that nite - and I can finally move my grip on the veil around in a similar, but by no means identical, way as I would without Zills on my fingers. Although I'm sure there will be plenty of veil disasters in my future - especially with Zills - this is still a quantum leap for me. Makes me squeal like an over-excited teenaged girl!

Beltane performance with DCM at Felton's "Don Quixote's". Did our 2 John Compton numbers (Zill and Ya Bint Al Shek) as a capella numbers. Went well, Lana and Janelle also performed.

The night opened with a priestess invoking the quadrants after the Witchy/Wiccan fashion, DCM followed her movements. I'm a Pagan, but not a Witchy/Wiccan variety - but this was cool as I can function in this context well enough.

Performance with DCM at the Bay Area Belly Dance Festival. Did our John Compton tribute, and in a manner similar to 15 Feb, I was glad I had good makeup on - else my face would have melted off...

Thanx to Photographer Daev, there are 3 new pix in the 2014 Gallery, from the 9 February Santa Cruz Raks DCM performance!

Performance with Didi's "Nahaash Raks" at

Pantheacon. We performed a piece we've been working on for the last six weeks or so: "Dancing with the Elements". I represented Fire. It went both very well and very bad. Very well as we all danced well and had MANY compliments. Very bad as our music cut out 2/3rds the way through our dance. We weren't the only performers that this happened to either. Reminiscent of the old Kalisa's, where music/sound problems happened all too often! Maybe next year they'll hold this event when it isn't a Mercury Retrograde?

Hotter than H,E, double hockey sticks in the performance venue, thought I was gonna melt - but my makeup held up! That's why it pays to use the good stuff, although I did have to make do with some kind of God-awful Revlon lip gloss that I think is gonna hit the ash can as soon as I get something better in that color (although in Revlon's defense, I have 2 other lip glosses of their's which are just fine!). Maybe it would make a good target.

Saw several folks there that I knew, including the Tribal troupe House of Innana as well as Firefly, who performed a beautiful dance personifying electricity.

Performance with DCM at Soquel's "Michael's on Main" - we did our "Tribute to John Compton" with 2 Ouled Nail dancers. Lots of fun, met a new dance sister from Grass Valley, Lana performed, got to hobnob with friends, blah, blah. Good times.

First pix for the 2014 Gallery, thanx to Didi who donated them!

Finally got some pix of last September's DDF show put into the 2013 Gallery. They appear on the second page of thumbnails, and are all screen captures from the video. Enjoy!

Janelle, who was also present, complimented me on my Zill playing, and I had several compliment me on my solo - as well as my makeup. Guess I'm starting to figure out this whole makeup thing!