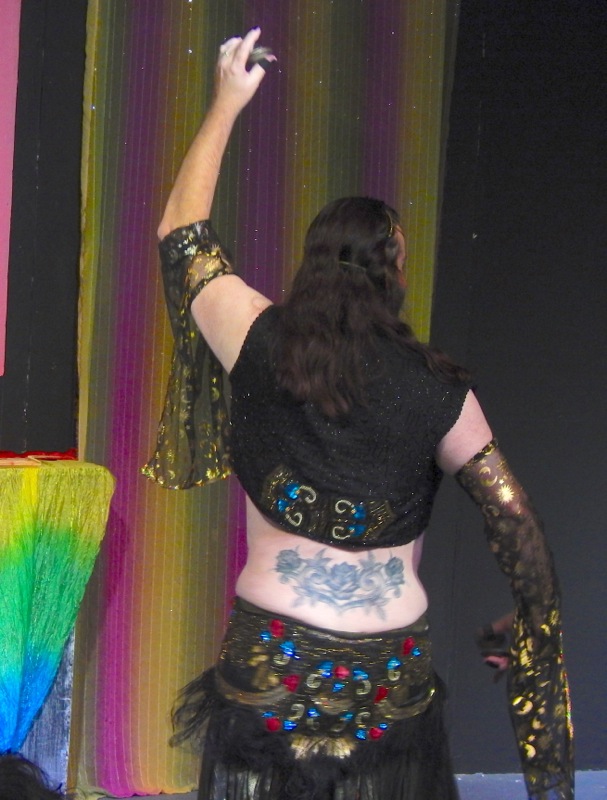 Just got back from tonite's with Dunia's girls, a really cool 9/8ths choreo - including Zills with my beloved Zildjians. It went well except I had something happen that I've never experienced before. The thrill of getting my skirt caught in a folding chair on my way up to the stage! Since this happened right next to the video camera, I imagine somebody's going to have to edit in a particularly loud zaghareet at a certain point to cover up my cussing!!!!

Pictures of Coastal BellyFest are now (finally!!) in the 2016 Gallery.

A performance at the "Santa Cruz Raks" showcase. Performed my "Mambo/veil/kiss" routine with my Zildjian Zills and my "Suns and stars" veil. The performance went well, the veil-while-wearing-zills went swimmingly, and I got lots of compliments from dance sisters, audience, and the "Felthouse Family Band" who played for some of the dancers. This band plays mostly eastern European music of an ancient mode that is VERY beautiful! They liked my finger cymbal playing.

One dance sister told me that she was thinking of Cory Zamora when I was dancing because of the zills and veil combination, plus another was just flabberghasted that I could do that - and this dancer is an excellent and experienced dancer in her own right! "Setareh", the hostess, knows how to dance this, I've seen her do it; but I guess its becoming a lost art. Thanx go to Cory for making me learn how to do this!

Another video, one I'd given up on, surfaced of my Santa Cruz Raks performance on 17 July:

A video of the Coastal BellyFest of 1 October 2016 has surfaced:

YouTube Video - I'm the tall one in the back and my head-slides suck. STILL waiting on still photos from this event!

Performed my cane dance with Nadia Gamal's cane "#1" at the Pajaro St. Grill. Got lots of compliments, including one from Janette who says I'm (FINALLY!!!!) getting the stage presence and dancing with intention thing down. Its been my bugaboo for years and what I've been concentrating on for the last 3 or 4. Also, thanx to Cory Zamora's critique of an earlier performance, I mixed in some Debke steps with the appropriate section of the music - that part probably came out more Greek than Arabic, but at least it was there!

An unexpected performance - with both Dunia and The Mighty Siwa! For the first time since about 2010/2011, we danced as Damascus in a "Gala show" at a new Belly Dance festival in Santa Cruz called "Coastal BellyFest". We performed "Pom Pom Perot" and "Catwalk", both of which we had performed years back as Damascus, both of which were originally Dunia's choreographies. This is my very first time ever dancing with Dunia, and what an honor it was! Of course, its always an honor to dance with Siwa - and my lovely sisters in dance. Pix forthcoming...

Nice performance at the Pajaro St. Grill! I wore my Damascus "Harlequin" costume - first time in a very long time - and did a "triple header" of "Mambo/veil/Kiss" with my 4 yard chiffon varicolored veil and Zildjian Zills. Although the veil gave me a bit of a problem at the start, I just dealt with it and kept going. Zills on during veil - I can now pretty much even add "of course" to that statement! Well received, a group of Tribal gals loved my Zilling, and I won 2 prizes in the raffle!

My dance sister Pam took several pix, they are in the 2016 Gallery!

Sometimes things don't stay in order, pictures from the 17 July Santa Cruz Raks performance have arrived and can be found in the 2016 Gallery, although at this point they're in the middle of same!

A marvelous workshop with Dunia, teaching what she does best. Classic American Cabaret Belly Dance in all its beauty, power, and glory! I helped demonstrate advanced finger cymbal playing along with my dance sister Celena (who is a LOT better than I am at this!).

Dunia returns to the stage for the first time in about 5 years in a show put on by Santa Cruz teacher Sese - and what a performance it was! The look of sheer joy on Dunia's face was a sight to behold! But there was more - her veil routine was so beautiful, that tears literally came to my eyes. That has only happened to me once before, Lana once evoked similar emotions years back at Kalisa's doing floorwork with a veil.

Pictures from Carnival of Stars in the 2016 Gallery, as well as a video clip on the the Video Page.

Yet another cane dance performance, this time with Nadia Gamal's cane "#2". This took place at the annual Watsonville Strawberry festival, relocated this year to the downtown district. There was a bit of trouble getting the sound system to work, strange and wonderful noises would be emitted from it at the start of several dancer's sets - kinda sounded like someone trying to start a Harley!

Pro tip: When cane dancing on a porta-stage, it is better to NOT whack the cane on the floor too hard when the DVD player is resting on the same stage! Ask me how I know this...

Carnival of Stars solo - a reprise of the 17 July cane dance - this time with Nadia Gamal's cane "#1". Overall went very well, I was told afterwards that I was projecting "happiness and joy", which is my intent with this dance.

Gave a shout out to Cory Zamora, Dunia, and dance sister Celena for their help with my cane dance technique. Pictures coming!

A single, lone picture has filtered in and has been posted to the 2016 Gallery. More are supposed to be on their way.

Wow, almost 4 months since my last performance. I don't think I've had a hiatus this long since I broke my foot dancing in Y2K!

In any event, I danced a cane dance at Santa Cruz Raks, the first cane dance I've danced since the Carnival of Stars performance of 6 August, 2011, virtually 5 years ago! With some personal instruction from Dunia, plus working with one of Cory Zamora's DVDs, I worked up an all new cane dance that I'm calling "Zamora's Cane" because of Cory's help and influence, plus the fact that she steered me to the music I used. Dance sister Celena also deserves some of the credit!

UsedNadia Gamal's cane "#2", and while the performance wasn't perfect, it was the best cane dance I've ever done. I managed to remember 95% of what I wanted to, and really had some fun. There were some sound problems throughout the evening, I had a couple of silent spots, plus one of those herky-jerky moments that lasted about 3 seconds - so I herky-jerkied along with it! I wore a brand new Balady dress that Dunia put together for me - it looks great and it behaved itself, long sleeves and all!

Pix will be forthcoming...

Something interesting happened to me in Dunia's class. A dance sister, "Celena" subs for Dunia when the latter is out of town or whatever. We were going over 3/4 shimmies. I do 3 types of 3/4 shimmies: 3/4 twist down, 3/4 out, and 3/4 up. Turns out that what I thought was 3/4 up was actually 3/4 down - once Celena pointed this out to me, I realized that she was right! So now I get to figure out the real 3/4 up, which I can now do at glacial speed. The good news is that the 3/4 down (and 3/4 twist down) are actually much harder to learn than the 3/4 up - shouldn't take me more than a couple of years to get it!

Finally got 3 rather low quality pix of the 5 March performance and put them in the 2016 Gallery. They're in the middle since subsequent pictures have already been posted. 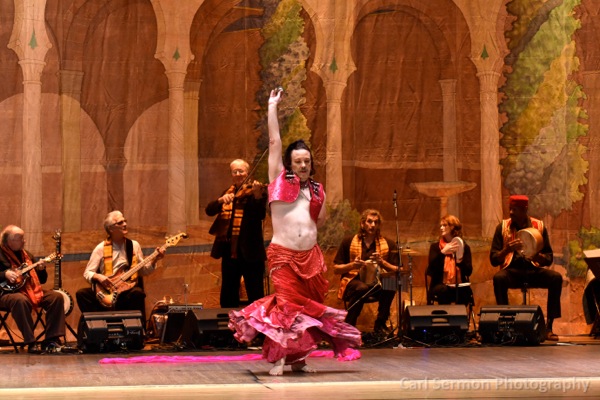 I'm getting lazy in my old age and have - at least for now - altered my previous stance about YouTube (which to be fair has really improved over the last several years), and have posted my Rakkasah 2016 video there.

Overall, I'm "ok" with this performance, although it certainly could have been better. I feel that the veil section was uninspired and that the main part fell into "repeat-itis" as I was having so much fun that I forgot to do 3/4ers of what I had intended! On the other hand, I got LOTS of compliments on my finger cymbal playing.

Rakkasah! Danced on the main stage - first time ever as a soloist (before, it was either solos on the "Cabaret Stage" or Troupe dancing on both.) - dancing to "Light Rain" LIVE!!!!! And in a new costume to boot! Using my 4 yard fuchsia veil and Zildjian Zills, I danced to an abbreviated "Dark Fire", and then the full length "City of Dreams". No major mishaps, although I lost a Zill about 15 seconds before the end - I just held it in my hand while I was spinning and clanked the other pair. I forgot a lot of what I had rehearsed, but was emoting/projecting pretty well. I was complimented by the band on my Zill playing - which is a high honor because I'm sure they hear their fair share of crappy finger cymbals! Pictures and video on the way!

A reprise of the 30 January performance - same venue, but different audience! Great reception, wore my Majida dress for the first time in I don't know how long. Dark, stormy, rainy nite! I have pictures for both the 30 Jan as well as the 25 February performances, I just need to get off my tail and get them posted!

A performance with DCM at Don Quixote's. We opened with a brief ritual, then performed John Compton's Bint Al Shek and Jamilo to a great reception by a great crowd!

Performance at "Salinas Raks" at the Pajaro Street Grill. I did this as a "dry run" for my upcoming Rakkasah performance which will be to my favorite band, "Light Rain" - LIVE! So I made a 7 minute recording similar to what they will be playing for me; an abbreviated "Dark Fire" for veilwork, then dancing and Zills to full length "City of Dreams". This time I used my 3 yard "star cluster" veil and the Zildjian Zills.

It went VERY well, if I say so myself, thunderous applause, lots of complements, everything a performer could ask for! Pictures should be forthcoming.