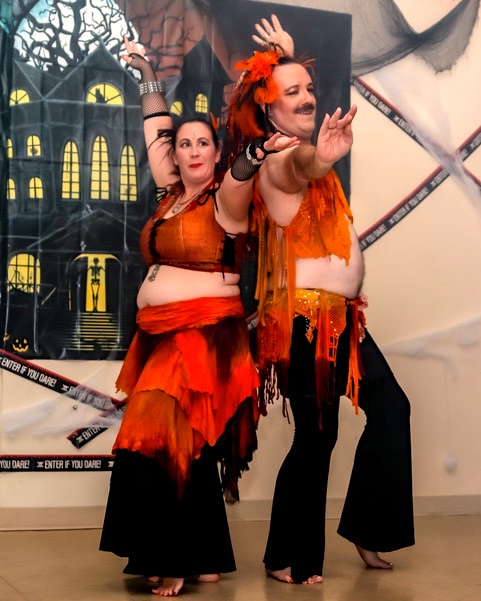 YouTube Video. Gorgeous show, worth the 1 hour plus to watch everyone! As far as I'm concerned, I was the least of the dancers represented. Don't miss the two Tribal gals from Mexico who did a wonderful skirt dance in some downright yummy skirts! Another must see is a cat that self-cameoed in one dancer's performance - it was cool!

As mentioned before, I submitted two different versions of this dance for consideration, this one was a bit tamer - and a bit better danced - and was what was included in the above show:

This second one was danced in the "old skool" style, bare legged and underwearless "Turkish skirt" costume, as Valeria told us how it was done back in the day:

YouTube Video. No costume malfunctions (THANK GODDESS), and I like it better from a costuming standpoint; but the actual dancing wasn't as good on my part as the above video, so that one was what was used. But I can say I did it!

Video from the 5 December performance now

here. The darkness didn't do the video any favors, costume details disappeared in the dark. Thank Goddess Zaira gave me those LED candles, otherwise the goblets would have disappeared completely under my bell bottom pants - which is certainly an argument in favor of dancing this the "old skool" bare legged way. With the lites under the goblets, the view still isn't any prize - at least not in the video, but far better than otherwise. Zills can also be heard if listened to carefully. I'm not particularly thrilled with my performance here either, but it is what it is, and it certainly felt nice to be doing it! Danced to the Mirage version of Siseler, a new version (for me) of an old favorite that was recommended by Cory Zamora. Several dancers, myself included, wore that suddenly "popular again" traditional Belly Dance accessory, the face veil! 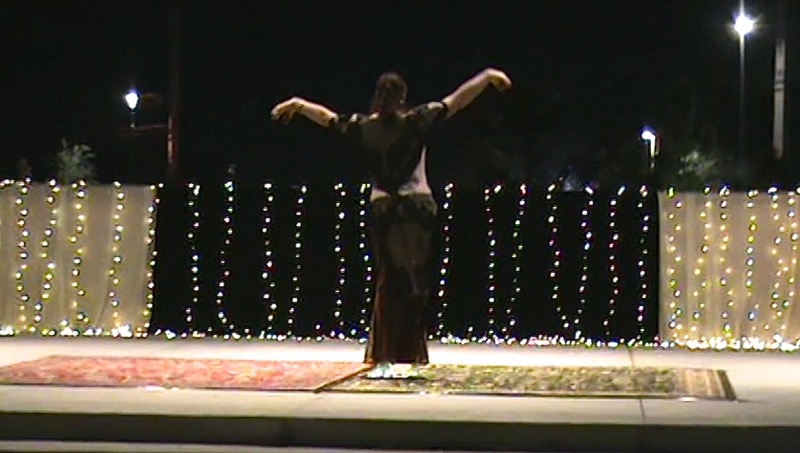 No stills were taken at this performance that I know of, so I added several low res screen grabs, similar to the above, to the 2020 Gallery.

I went ahead and performed my Turkish goblet dance. The event hostess, Zaira gave me varying color LED "candles" to put under the glasses - being this was a nitetime performance, they really showed them up: 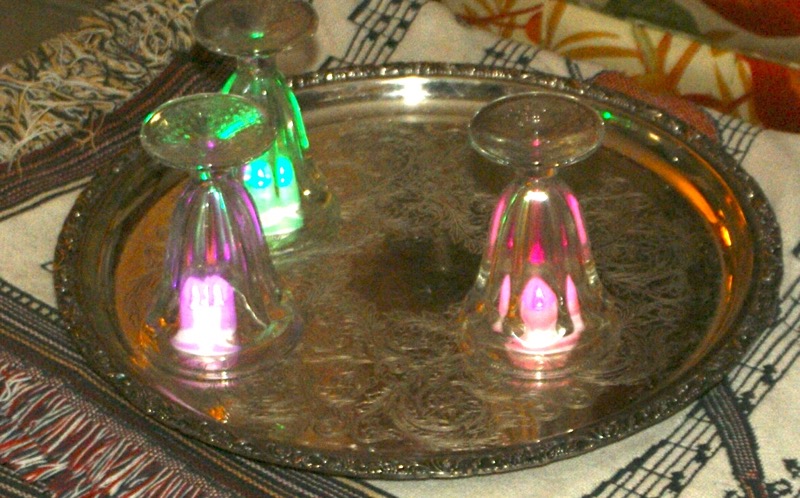 Here's hoping the video comes out well with these! I should have it in a few days. Virtual performance - the previously mentioned non-realtime performance was recorded today. Turkish goblet dance, something I've been playing with for probably 15 years, and decided now was a good time to do it for real. It will be combined with others to form a complete virtual show which will be released on youtube on this channel:

Hostess's You Tube Channel at 8:00 PM on Saturday, 19 December. Sometime after that, I'll also post it on youtube as stand alone performances.

I say "performances" plural, because I danced it twice. Once in the "safe version" of the costume, and again in the "old skool" bare legged version. We'll see which makes the show, but I'll post both. This involves a so-called "Turkish skirt" which is slit up to the hip bone literally:

Many, many years back, I was in a workshop taught by the sublime Valeria, who expounded on these skirts and how they were worn back in the day - that is to say, sans underwear! Needless to say, its a bit scary, and I never dared wear it without underlying bell bottoms until now! Yet this isn't the only "first" for this performance, I have been playing around with the Turkish goblet dance for probably 15 years, and never dared to do that either! I figured since this was a non-realtime virtual performance, I could do both - so I did!

I do have to say that it felt very liberating and empowering to dance like this - I'll be doing it again in a live in-person outdoor performance next week - BUT - I'll wear the safe version of the costume for that! Its bad enough that I'm going to do the goblet dance live without having to worry about a stray breathe of wind!

Getting ready for two performances, another virtual - this one pre-recorded, not even live; but another one that will be live in-person. So the first one will be second, and the second one will be first as the pre-recorded one will be recorded before the 2nd live one, but will be shown after the live one so it'll actually be 2nd! Did you follow that temporal sequence?

Well, sorta. Closest thing possible with the ongoing CoronaVirus hysteria - a virtual Hafla. The first time I've ever done anything vaguely like this - and I hope the last time as well! I just did a 2-½ minute number to the Brothers of the Baladi version of "Siseler", playing my Zildjian Zills. I was feeling pretty rusty, but the performance wasn't too bad, Jenn complimented me on my arms! My wife took a couple of pictures which are now in the 2020 Gallery. Video on

It goes without saying that "Claudette the Camel" shared the stage with me! 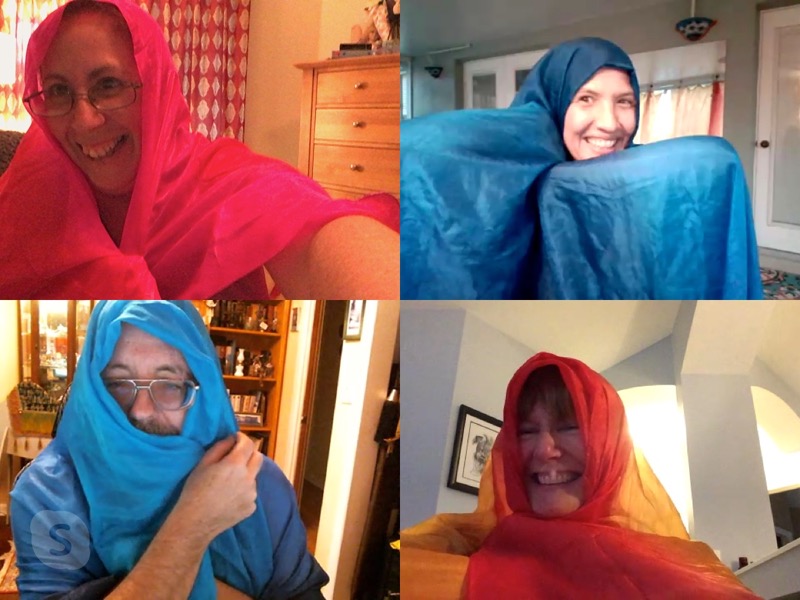 While digging around in seldom visited parts of my hard drive, I encountered several old pictures that are now in the Old Pictures Gallery. Old pictures of me, Siwa, Kamaal, and others. Mostly from the "oughts".

The world has come to a complete standstill and is holding its breath what with the Coronavirus hysteria. Classes are being held online for the nonce, and performances are canceled. Although I think our media has - as usual - over-hyped and spun this thing beyond all believability, its still probably for the best. The online classes are pretty decent for drilling, not so good for veilwork and choreography practice! 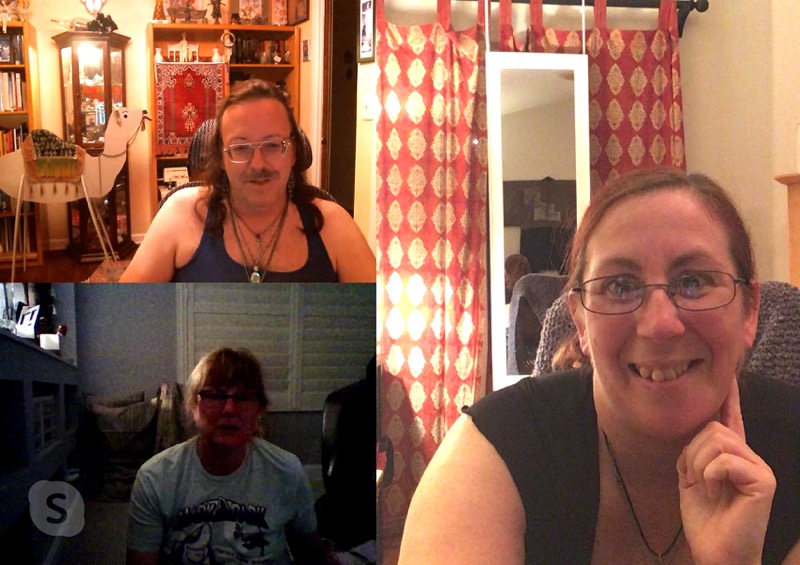 Every few years, I have to check my links pages for broken links. This has been done again today, last time was late 2017. About the usual number of dead links had to be removed, some I was able to update, at least two have apparently gone and hid themselves in a certain "social-media" website where I will not follow. It is what it is.

Valentine's Hafla! Performed an old favorite to the tune "Raks Africa" - this was my "Solo-3" back many years ago. My wife calls it "Kick Ass"! I used my burgundy red Chiffon veil and Zildjian Zills, but I barely pulled this one off as I was fighting a sinus infection/head cold. It came out better than it had any business coming out, even the high speed spin was OK. I haven't performed whilst sick since a certain DDF performance years back, not something I recommend.

Pictures are already in, and posted in the 2020 Gallery. They are MUCH better quality than the ones from the 25 January performance, the lighting was vastly better, so the pictures came out better. There's still some funky colored lighting, but it doesn't dominate the pictures like that horrid situation with the previous venue.

Several other old videos have surfaced, the first one from 21 October 2005, performing a cane dance, at Kalisa's, followed by lengthy footage of the after party. Lots of old friends in the after party footage, Lana, Isabella, Jenny, Chris, Thiem, Marie. Janette can be heard zaghareeting in the background during my cane dance. The rather lengthy after party footage is well worth watching, esp. for Chris's floorwork with sword, as well as Lana and Isabella twirling around each other!

While I was nosing around, I also discovered an upload of an artistic video that includes me, from a tribute show back in 2015 for Kalisa Moore:

A short video of part of my performance at Setareh's "Santa Cruz Raks" at Bruno's restaurant in Scott's Valley, California on 26 April 2015, very good video quality for a change:

An alternate angle of the Siwa/Dunia/Troupe Damascus performance at Coastal Belly Fest 2016. There's already another, better video online of this performance, but I figured I'd post this one as well.

Jenn gave me 4 more pictures from the 25 January event - they've been added to the 2020 Gallery.

An unexpected video, dating from 27 August 2005 was discovered while I was digitizing my late Mother-In-Law's video tapes! Being that it was 15 year old video tape, quality isn't the greatest. Arms aren't the greatest either, and I really needed to do something with my veil besides "Toreador"! This was before I learned how to keep my finger cymbals (Saroyan "King Tuts" this time) on whilst performing veil - putting them back on like I did here is just tacky! I've learned quite a bit since then - it is what it is!

Finger cymbals are tricky to mic under the best of conditions, in this case they overloaded the camera mic and caused the main music to fade to the background.

Workshops by day, a performance in the evening!

Three workshops, I did two of them. The first was a Tribal style from Adena Zahara which was a lot of fun, particularly because she pulls her Tribal repertoire from "everywhere", Tribal, Folkloric, and Cabaret. In fact, the first question she asked was, "Has anyone studied with Kamaal?". She's also studied with and/or knows a lot of the "old skool" dancers I know, including Fahtiem, John Compton, and Alexandra King, among others. Her and her troupe performed in the evening hafla, and one of the numbers they danced was very reminiscent of Hahbi 'Ru!

Next was a workshop by Yvonne, but I reluctantly skipped it because I felt that I needed to conserve my energy. As it turned out, I was right!

The last workshop was by local Cabaret sensation, Thalya. She taught a VERY nice drum solo choreography. I don't generally do well with choreographies in workshops, it takes me too long to learn them, so I generally concentrate on the technique. Thalya's class was a welcome exception. Her choreography was easy for me to pick up because it made a lot of sense and Thalya is easy to follow. I'm giving some serious consideration to attending her regular classes.

Then there was the evening hafla, where I opened the second half with a Greek number, "Children of the Revolution". Who says you can't Belly Dance to a Greek Syrto?

Dance sister Bianca was kind enough to take a pile of pictures. It wasn't easy - yet another poorly lit and backlit venue, plus blue on blue lighting was not conducive to good pictures. After some post processing however, several of them turned out decent enough, and are now in a newly created 2020 Gallery.