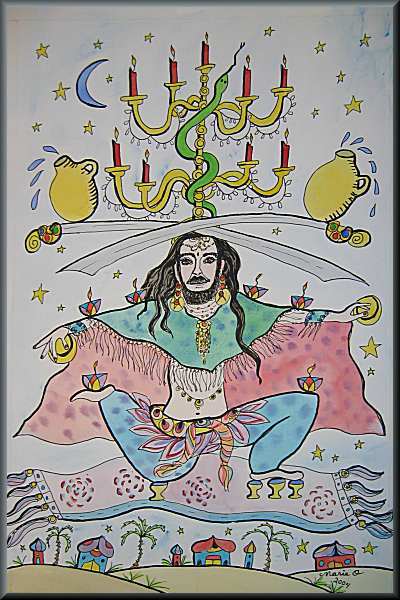 Dare to dream the impossible dream!

This picture takes a bit of explanation! It came about as a result of several on-line conversations, mostly on

Bhuz.com when my dance sisters and I were joking about crazy, improbable, cliché, or otherwise unbelievable Belly Dance routines. Too many props, too far over the top, dancers doing more than they are capable of, etc. were among the topics discussed at various times.

So I, as a joke, said that I would do a dance which included:

After some kidding around, someone suggested that I should have a caricature artist draw this idea up. This picture is the result. One of my dance sisters, Marie O'Reilly, who dances with me frequently, is an artist and agreed to take on the project.

After reviewing several thumbnails, we decided that while it sounded good, Wings of Isis along with double veil just didn't draw well - the picture was too cluttered and you really couldn't tell what it was trying to depict. So it became single veil, and the tambourine was dropped as well. To make up for it, she added a second water jug and drew me on a flying carpet with some suitable scenery beneath it!

For those with sharp eyes, it would appear that the double sword with the water jugs wouldn't balance. Let me hasten to assure you that these are special swords - they have a infinitesimally small amount of black hole material in the blade to counter balance the water jugs. Yea, that's it!

Although, darn it!, I really should have added a cane!

Although this picture is very definately all in fun, it also reminds us to "dream big", and to not be afraid to "Dream the impossible dream".

Enjoy, but please remember this picture is copyrighted. Now available on select