Nothing significant about these, just a few machines that caught my eye...

"Mercedes". Perhaps these were made by, or imported into, Soviet bloc countries
during the cold war (The rather strange "East Europe" on this one would suggest this.)? This
picture was sent to me by the machine's owner, who found it in a rubbish heap in Athens, Greece. What a beauty!

A contributor, "Alexander" writes regarding this machine (lightly edited):

Hello!
Perhaps you might be interested on your page in the first picture shows the Russian sewing machine, manufacture of the USSR, were made with the same pattern from roughly 1970 to 1985. With an inscription "Eastern Europe" and "Mercedes" never saw them again. (This) model is called "2M", made in Podolsk, near Moscow. The plant was built by Singer about 1902. After 1922, the Soviet Union there produced a lot of household and industrial sewing machines. With such a pattern sewing machines were rare and were usually exported under the "UNION" (name).

A dance sister wanted me to find a home for this nice machine.
The above friend took it in!

His collection continues to grow with this White badged Japanese Class 15.

Randy, of the NSMCO list acquired this Japanese "Reliable".

I love the bright colors! He says it runs just fine.

Love the nite shot with the backlit badge and jewel lite above the needle!

A coworker snapped this picture of an unknown industrial machine.
I was guessing it might be a Consew, but a fellow Sewing Machine
enthusiast told me it is probably a Singer model 7.

A Kenmore that passed through my hands, Sears model number 158.13201 which makes it
built by Maruzen/Jaguar Sewing Machine company in Japan. It was given to me, I cleaned
it up, cut down the ratty MDF cabinet to a table top base, and passed it on to a dance
sister in need of a machine.

A White 1477 that passed through my hands. I cleaned it up, lubed everything, tested it thoroughly,
replaced the bobbin winder tire, and donated it to a homeless children's school that was in need of
several machines. It included a "flatbed adapter plate", and uses common class 15 bobbins. Nice machine.
Apparently, the White 1477, 1488, and 1499 are essentially identical. No maker's marks were evident.

Randy contributed this White from the 1980s. About it he says:

It fits in a standard size cabinet or carry case but also has rubber feet on it. Two speed motor.
3 position drop feed. Three needle position. Top rear tensioner - dual thread paths for twin needle
sewing. Thread pulls "up" off top of spools. Full rotary with drop in bobbins. Class 66 bobbin
size. All metal outside except for trim on top front with White name and clear window for stitch
selection. Has stretch stitches and 4 step buttonhole. Bottom shaft is driven by wide cogged
rubber belt. Machine is light alloy. All adds up to early 1980s - last of home flatbed machines.

This model, in common with my 1976 White 690, uses a duplex cord setup, abandoned by most
other makers in the late 1960s. However, I find it to be one of the better ways to handle the wiring.

Backside. I really like the vertical thread feed - in fact I retrofitted similar to my White.

Randy sent these pix of a "Prazentra"...

Neither he nor I know anything whatsoever about it...

With a name like "Tikka", you'd think it was Indian - but its actually Finnish!
Apparently made exclusively for export to the Soviet Union from the mid 1940s
to the mid 1960s. Note dual motive power. Photo courtesy of

This Toyota built "National-Home" has nothing to do with the National Sewing Machine Company.
Picture contributed by "Valerie" 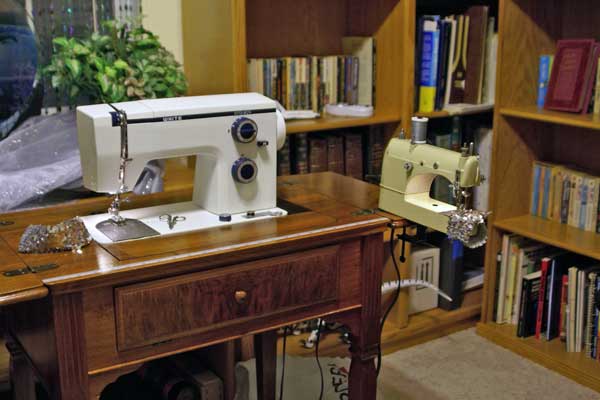 My very own Bell and White and the
Singer Cabinet in a "Two Fisted Sewing" situation, making
little sequined armbands for a Belly Dance costume. 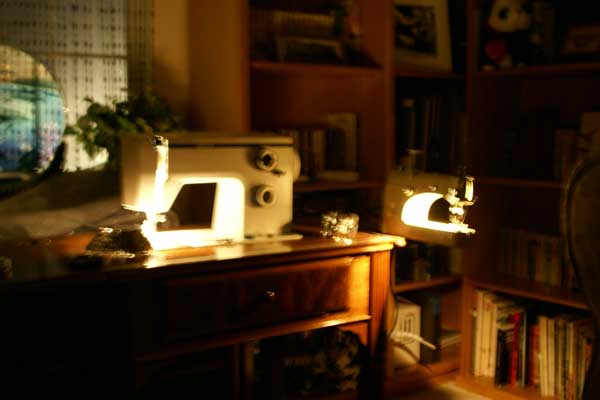 And because I couldn't resist the "artistic shot", here's the same scene in the dark.
Slightly blurry yes, but I'll boast that it was handheld in the dark for a 4 second
exposure - that's what modern image stabilization can do!