A bit yellowed over 16 years, but otherwise pristine.

Not a "real" Pfaff at all, built by Japan's Calanda.

What I've been able to find out so far:

Figured I could use a serger what with all my veils and stuff. Saw this one on an out of state Craig's list, and bought it sight unseen - having an out of state family member act as inspector and purchasing agent.

When it arrived home, I discovered that A) The needlebar was loose from its oscillating mechanism (due to, no doubt, shipping vibration); B) It only had the rolled hem foot, no regular foot in sight, and C) it only had one of the original four thread cone adaptors for the spool pins.

The model 776 is, of course, somewhat rare. I never seem to be able to buy a "normal" sewing machine - my White 690 is another oddball machine! But after doing some research, I found that the model 774, 776, and 780-series all share parts, including presser feet. That was good, because I was getting absolutely nowhere looking for parts for a 776 - 774 and 780 series kept coming up, but no 776 until I had this factoid figured out. I was able to purchase the missing presser foot and thread cone adaptors at a local sewing shop for $20. The loose needlebar was an easy enough fix - I paid a pro to do it! Tightening the screw holding the needlebar wasn't the problem, getting the needlebar in the correct position takes someone who knows what they're doing so that the timing is correct.

It even has the original manual, and the original receipt from a sewing store in Portland, Oregon dated 21 February, 1993!

It works like a champ, I first serged a couple of veils with it, then 4 thread serged a pair of wrap-style tulip skirts for a dance sister and myself. Now I use it quite frequently. The most important thing to remember about a serger is, after you've triple checked that the threading is done correctly, make sure the thread actually passes between the tension disks. You cannot see the disks from the front on this model so jack your head around to the side and take a look to see if the thread is just sitting on them instead of actually passing between them. If not, you'll be hating life! This is most likely why many sergers - including Pfaffs newer than this one - have sideways tension dials similar to many sewing machines so the operator can see if the threading is correct with regards to the disks. Before I figured this out, at one point this machine almost landed in the swamp behind my house!

Another thing: Put a drop of Loctite on each of the tiny set screws for the needles. Then don't over-tighten the screws - let the Loctite do its job of not letting them back out. Many years of over tightening these screws left one of the threaded holes all but completely stripped out - then I finished the job. Fortunately, a machinist friend owed me a favor, so I had him make me a pair of new (larger diameter) set screws - they're NOT an off the shelf item.

It has been sold under several other brand names, I've seen a "National N50E" serger that is the "spittin' image", as they say, of this one; also as a "Euro-Pro". I've also seen a Pfaff 776 with fancier graphics, but otherwise identical. Apparently, the "National" models N30, N40, and N50 are very similar also, as I purchased spare knives that supposedly fit all these models.

Here it is as a "MammyLock", purchased in Paris by Melanie Cansew
who graciously granted permission to use this picture. 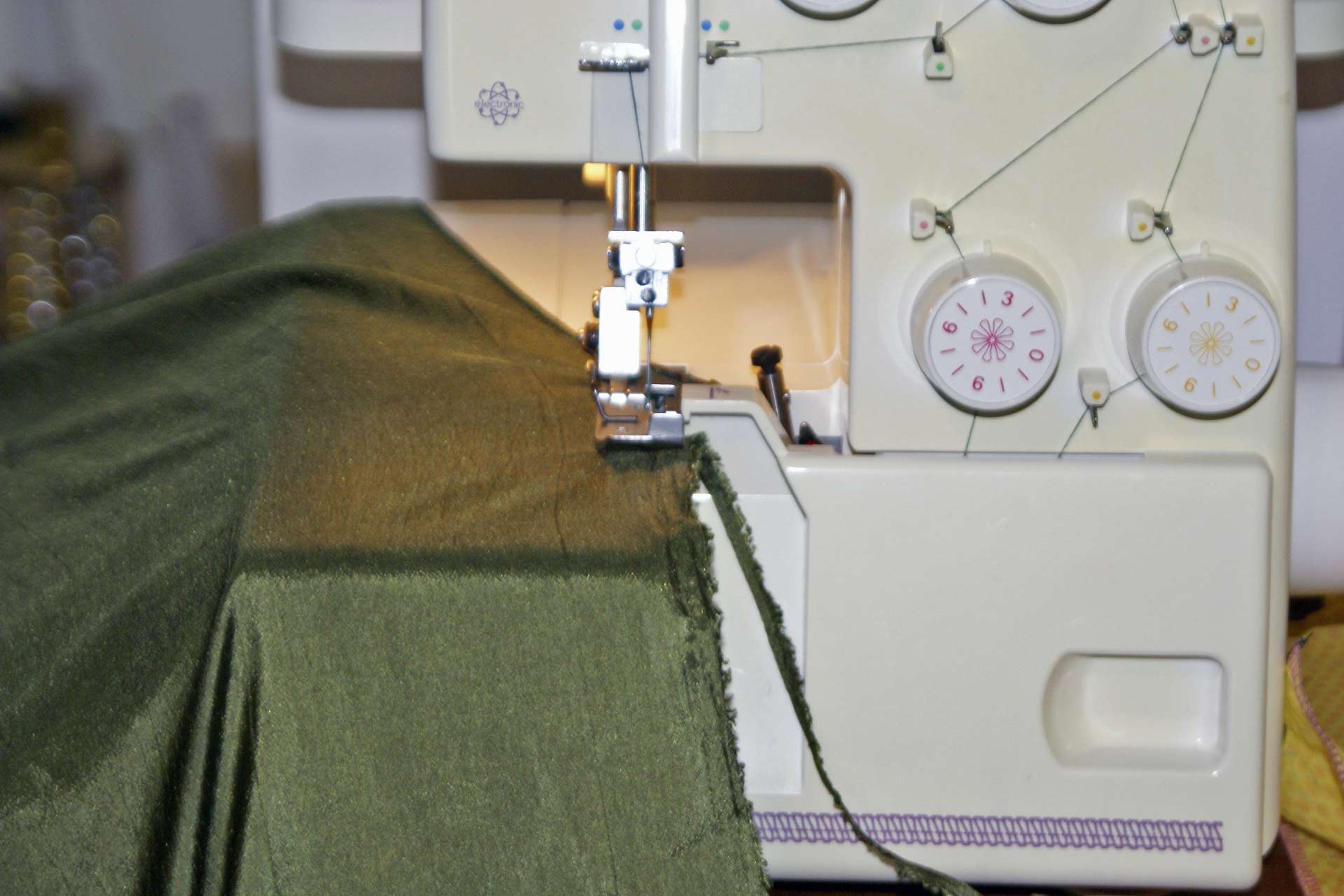 The 776 (foreground) at a Belly Dance "Stitch and Bitch".
Directly behind it can be seen my "American Beauty" Reversew.
The lovely lady to the right is the proud owner of my late Mother's Montgomery Ward machine.
Yes, my White 690 was hard at work this day also - in a different room.
Oh, the machine to the far left? A modern, plastic Singer belonging to another dance sister.
Does quite well, although I don't think it "holds a candle" to my '57 Singer 99k which was not
in use here, but I take it to "away dates" frequently.