And Other "Flip-Top" Machines

Zorba has made freely available a PDF of the manual (18MB).

As it spans two pages in the manual, you may want to download this separate Machine Diagram to print out on A sized paper (1.6MB).

The above download was made possible by a collaborative effort. You can download a bad copy from the Singer website, but this one was mostly a separate scan by a fellow White 690 owner (the ONLY other one I've EVER encountered!), who graciously donated it. This scan was missing one page, and another was cut off, so the bad Siger website copy donated those two pages after some fixing, straightening, and post-processing! Then the separate machine diagram had to be painstakingly reconstructed. Enjoy! 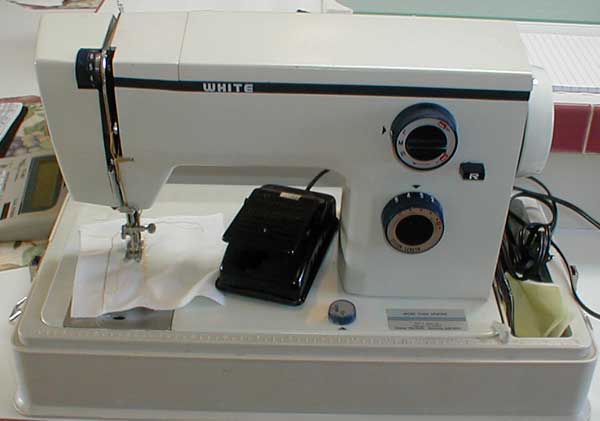 The White 690 as delivered.

What I've been able to find out so far:

According to the White company, this machine was made in 1976 (in Japan). Who built it, I don't know. It uses an oddball bobbin that is (apparently) only common to the 690, the 510 (Which looks identical to the 690 except its a free arm machine), and the 710. There are conflicting reports of these bobbins also being the same as used in the 4000, the 305 & 310, and something called a 691 (this latter may even be a typo) as well as a few others from White and competing makers (including a Simplicity and a Brother). This leads one to think that these machines were built by the same factory, but also that White didn't utilize this maker for very many models. Perhaps the bobbin sub-assembly was made by the same supplier for all these different brands/models. It turns out that these bobbins (and bobbin case) fit the Juki DDL-555, the Singer 20U, and several other industrial machines! I have no idea what that means, but its an interesting factoid. Hat tip to "Mike" who call this to my attention.

[In the] mid to late seventies a lot of companies folded into each other. Some of the manufacturers became nothing more then distributors. White had gone down this road in 1962. Many of their machines were bought from Janome/New Home. It looks like they were also buying from Koyo. White owned the Domestic name and if you compare Whites, Domestics, and Koyos you'll find a lot of the same machines. In the 70s, New Home, Koyo, Necchi, and White started to all look alike. I can only speculate that they were coming out of the same factory. If that's right, I suspect that who ever owned what the team that was designing Koyo machines probably came out on top.

The controls on the front of your machine look a lot like a Maruzen/Jaguar 158 Kenmore, but the top looks Koyo or maybe Janome. Koyo is my best bet. Maruzen/Jaguar didn't start making that kind of top till near the 80's. Koyo and Janome who had been supplying White had been making some designs like that much earilier then others.

I'm inclined to agree that it isn't a Maruzen/Jaguar from the fact that my limited exposure to machines of the period made by this company showed that they had a few plastic parts, whereas my White has none (not counting knobs).

Now to completely contradict myself, consider this: I recently came across a completely unverified factoid on another site that states that the White 305 - which uses the same bobbins as the 690 et al, was built by Maruzen/Jaguar! That machine does bear a passing resemblance to a Maruzen/Jaguar built Kenmore I worked on one time. If that website is true, this may or may not mean the 690 was built by Maruzen/Jaguar as well. Or it could just be the previously speculated common bobbin/case supplier theory - or both!

Whoever made it, the 690 does NOT use the common "Class 15" bobbins (there should be a law requiring all machines to use class 15 bobbins!), or other bobbins advertised as fitting "most White machines". Unless it specifically states 690, it doesn't fit.

I also don't know what total number of years the 690 was built, nor how many. I was able to place that the model 510 was made more or less concurrently as the 690, an eBay 510 manual bore a 1976 publication date as does my 690 manual. I do know these were called "flip top" machines due to the handy flip top that covers the bobbin winder and several auxiliary controls. I get the impression that this is a fairly rare machine - maybe 1976 was the ONLY year these were made.

Examine the above picture, and the indicated portion of the rotary hook mechanism (bobbin
and shuttle removed). That very sharp looking item was the cause of an interesting problem!

This was my first sewing machine, and is still my primary one. When I bought it, I had about as much idea of how to sew - and how to operate a sewing machine - as any common alley cat. So naturally, I made a ton of mistakes, had a lot of frustrating moments, etc, etc. while learning.

One problem I had a lot of, was thread tangles on the bottom side because I didn't know how to adjust the tension, I was pushing and pulling on the fabric while sewing, and I was using cheap thread. After I had gained experience and started using better thread, these problems largely went away.

However, one problem continued. I'd be sewing merrily along, and suddenly the fabric would become "stuck", it wouldn't advance. I'd have to cut the threads, pull the fabric out, and start again - although there wasn't (usually) any tangles anywhere.

I didn't know what was going on, and I thought this was normal and/or I was still doing something wrong. I finally noticed, that the "stuck" situation wasn't caused by the bottom thread - it was the TOP that would sporadically take a wrap around the entire rotary mechanism. At the same time, I was beginning to figure out that it wasn't "just me", that this was NOT normal - as I had by then acquired several other sewing machines for my burgeoning sewing machine collection, and none of them exhibited this problem. I had sewed an entire costume for one of my dance sisters at a "Stitch & Bitch" session on my Singer 99K as a for-instance - with zero problems of any sort.

So, I took a VERY close look at the rotary hook mechanism, carefully rotating it around, looking for small burrs that could be causing this problem - and I found one! Right at the very tip of the indicated area, was the tiniest little burr! It was so tiny, that it would barely catch a fingernail - and only at one particular angle.

Aha! I took some fine grit sandpaper, took about 4 swipes of the indicated area, and my fingernail didn't catch there anymore. A subsequent sewing test was totally smooth and frustration free!

So how did it get there? Who knows. It may or may not have been there when I bought the machine. Its very likely that I induced it with my early clumsiness, causing the needle to deflect enough to hit that spot. Or maybe the previous owner did it - or both of us!

I was led to look for this because tiny burrs like this will foul up an otherwise perfectly good needle, so it stands to reason that the same would be true in the hook area - and so it has proved. While I was working in the area, I cleaned up some dirt, crud, and wrapped threads from behind the mechanism.

So if your machine is doing strange and wonderful things - keep this experience in mind!

Searching for a needle plate

Seen above are 2 pictures of the Zig Zag needle plate for the White 690. The manual makes reference to a supplied straight stitch plate as well - which I do not have. I am posting this here in the vague hope that someone may encounter one some day! Even a second Zig Zag plate could be made to work as a straight stitch plate with some micro-welding and re-drilling - so I'd be interested in either!

To the best of my knowledge, this plate is unique to the White 690 sewing machine and NO OTHER. If you have information about where to acquire one of these plates, please contact me.

Looking at this older picture of the machine folded into its cabinet shows the dual spool pins.

Feeds the thread off the top of the spools before sending it on.

Most newer sewing machines either have horizontal spool pins or they have vertical pins with thread guides similar to this retrofit. I had been getting the occasional tangled thread at the spool, when I added this modification the problem went away (so far, at least!). It was a bit of a pain to make this thing - I purchased a thread guide for somebody's serger that looked like I could use it to fabricate what I needed. I didn't want to try to make one out of wire myself - good thing too as the wire used for thread guides is VERY stiff stuff, apparently spring steel. In any event some cuts, some bends, and a braze job later, I had my thread guide. Installed it using an existing screw - and as an aside, the spool pin bracket on this machine had been bent out of shape ever since I'ved owned this machine, so it was straightened out while I had it off.